BlackBerry 10 customers also have the option to anonymously help enhance the coverage and quality of TomTom's world-class traffic information by sharing traffic data.

"Having accurate and up-to-date traffic information integrated in BlackBerry Maps is an important feature for customers, and TomTom is a recognized leader that provides traffic data to many companies in the market," said Adrian Gould, VP of Handheld Software Product Management at BlackBerry. "We are pleased to expand our relationship with TomTom in support of BlackBerry 10 customers."

"By integrating TomTom Traffic, BlackBerry's smartphone customers will have access to the most accurate traffic information available," said Charles Cautley, Managing Director of TomTom Automotive & Licensing. "We are proud to be supporting BlackBerry to deliver enhanced location-based services to its subscribers across the globe."
Αναρτήθηκε από Εψιλον στ´ στις 10:40 Δεν υπάρχουν σχόλια:

Nokia is holding strong to its commitment to devices running on the older Symbian mobile OS by updating its Maps Suite to reflect the most recent road updates and locations.

New maps will have to be "cleaned" before the older ones are installed, a process which takes 5-10 minutes depending on which maps you have installed. The good news is all your current map info like Favorites is retained.
The new Maps version is versioned 2.50.103 and can be updated via Nokia Suite on your PC or OTA from the phone itself. To go the OTA way you have to go to 'Map Loader' from the settings menu in Nokia Maps, then tap on 'Check for Updates.'
Αναρτήθηκε από Ανώνυμος στις 05:14 Δεν υπάρχουν σχόλια:

With summer travel season in full swing, the Garmin and NAVIGON smartphone navigation apps are up to 25 percent off until August 4, 2013. No matter where you travel, Garmin’s navigation apps can show you the way. Both apps save the maps on the phone, so you won’t get lost even if you loose cell reception. A trip planning feature allows you to plan a whole road trip at home, so you don't have to worry about searching for places and entering them into the app while on your way. Other helpful features include speed limit warnings, real-time traffic (in app purchase), lane assistance, and much more. The Garmin StreetPilot app even shows you where to find the cheapest gas (in app purchase).
Here are the promotional prices (valid until August 4, 2013):
Garmin StreetPilot iPhone USA ($39.99 instead of $49.99)
Garmin StreetPilot iPhone USA & Canada ($44.99 instead of $59.99)
NAVIGON iOS USA ($39.99 instead of $49.99)
NAVIGON iOS USA & Canada ($44.99 instead of $59.99)
NAVIGON iOS MyRegion (East, West, Central) ($22.99 instead of $29.99)
NAVIGON Android USA ($29.95 instead of $39.95)
NAVIGON Windows Phone 8 USA ($29.95 instead of $39.95)
Αναρτήθηκε από Ανώνυμος στις 04:47 Δεν υπάρχουν σχόλια:

We are really excited to giveaway brand new TomTom GO devices to our fans on Facebook*:


This promotion is not supported or sponsored by Facebook. The information you provide is given to the contest organizer and not Facebook.com. They can be used for marketing purposes.
Αναρτήθηκε από Ανώνυμος στις 04:24 Δεν υπάρχουν σχόλια:

Aspen Public Radio Reports on the Benefits of Trucking Navigators

For safety reasons, truck drivers have to follow specific road restrictions based on the dimensions of their vehicle, such as weight, height or length. While consumer GPS units will find the fastest route, they aren't able to provide truck drivers any information about road restrictions. There have been several news reports in the past about truck drivers ending up on roads that aren’t suitable for their vehicle. A more recent example comes from Aspen Public Radio, reporting about an increase of truck drivers that violate the length limit of Independence Pass near Aspen, CO. The news outlet reached out to Garmin to see how trucking navigators can help truck drivers avoid restricted roads. The resulting report provides an interesting case study of the issue. The screen shot above from a Garmin dezl 760LMT shows that truck drivers sometimes have to take a detour to make sure they stay safe. Read (or listen to) the full report here.
Αναρτήθηκε από Ανώνυμος στις 03:48 Δεν υπάρχουν σχόλια: 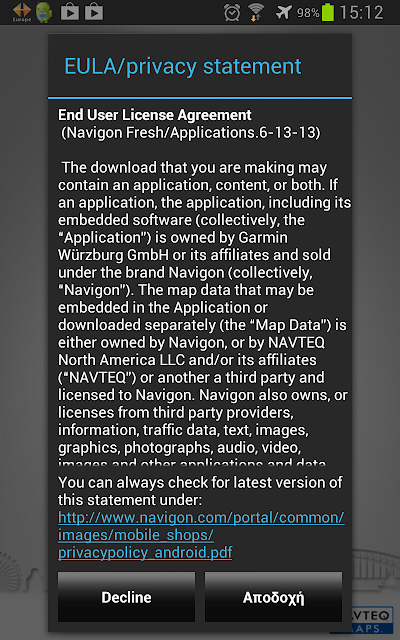 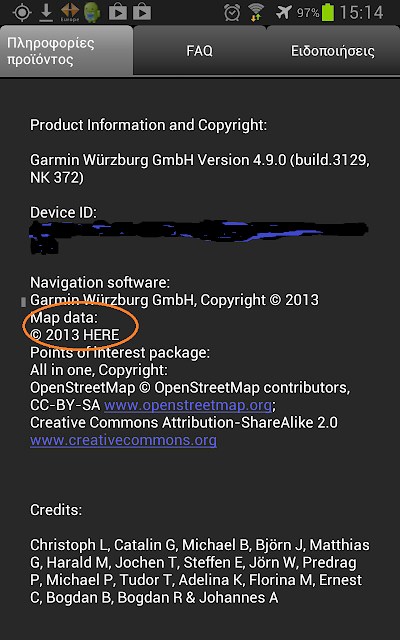 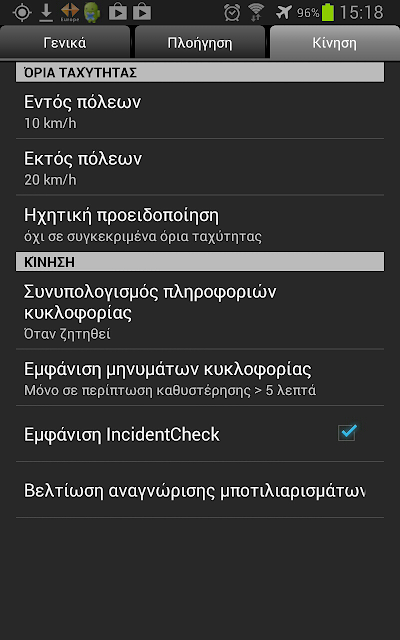 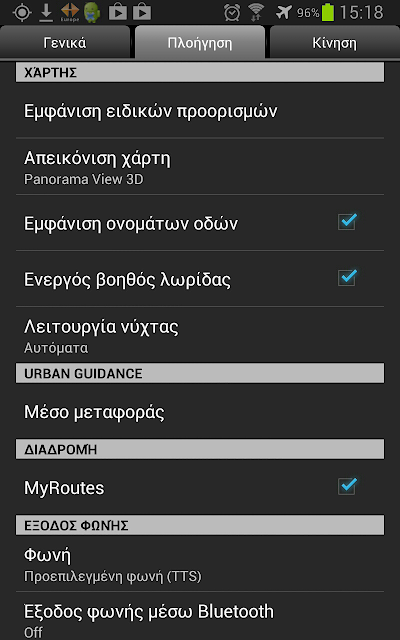 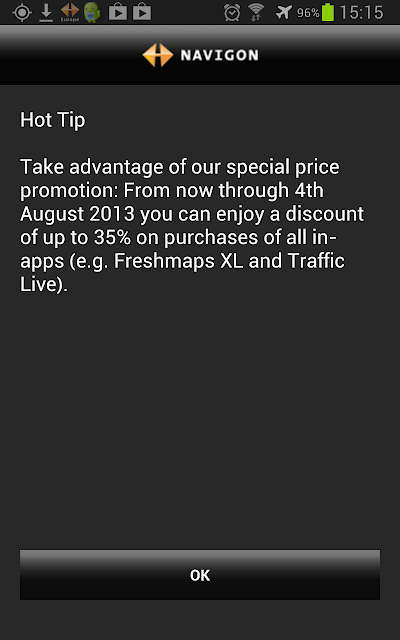 We're looking for your funny, creative and plain weird ideas about how to get fast drivers to slow down as temperatures rise.

Simply click the competition tab above and tell us your funniest anti-speeding idea for a chance to win!

Today, we announced our first portable head-up display for smartphone navigation apps[1]. HUD is an innovative new way of viewing navigation information in the car, projecting crisp and bright directions onto a transparent film on the windshield or an attached reflector lens. By providing comprehensive road guidance at a glance and right within the driver’s line of sight, HUD can help increase safety and reduce driver distraction. HUD receives navigation information from a Bluetooth-enabled smartphone running a Garmin StreetPilot or NAVIGON app.

HUD redefines the navigation experience by allowing drivers to find their way without taking their eyes off the road,” said Dan Bartel, Garmin vice president of worldwide sales. “Head-up displays currently have their place in select high-end cars, but HUD makes this technology available as an aftermarket accessory for any vehicle, at an affordable price.”
HUD offers more navigation detail than other portable head-up displays, yet presents them in a simplified way that doesn’t avert the driver’s attention from the road. The directions are easy to follow and allow drivers to navigate even the most challenging interchanges and traffic situations with ease. HUD displays turn indicators, distance to the next turn, current speed and speed limit as well as estimated time of arrival. It even lets drivers know what lane to be in for the next maneuver and alerts them when they exceed the speed limit. HUD also warns users of potential traffic delays and upcoming safety camera locations[2]. The crisp display automatically adjusts the brightness level, so projections are clearly visible in direct sunlight or at night.
Complementing the visual display, spoken turn-by-turn directions are provided simultaneously by the Garmin navigation app of choice, either through the smartphone speaker or a Bluetooth-connected car stereo. Music streamed to the car stereo from the smartphone will automatically fade out for turn-by-turn voice prompts. HUD also continues to display navigation information while taking incoming calls on the connected smartphone via hands-free functionality.
HUD is easy to set up. Users can choose between displaying navigation information on their windshield, with the included, transparent film, or on to the included reflector lens that attaches directly to HUD. The device pairs wirelessly with a compatible Bluetooth®-enabled iPhone, Android™ phone or Windows® Phone 8. An integrated USB port on the vehicle power/adapter cable makes it easy to charge the smartphone while driving.
HUD has an MSRP of $129.99 and will be available this summer. Garmin StreetPilot and NAVIGON apps1, starting at $29.99 for a regional map (NAVIGON U.S. Central, East orWest), provide premium turn-by-turn navigation for smartphones, including onboard maps, lane guidance, speed limit warnings2, real-time traffic2, and many other features.
Αναρτήθηκε από Ανώνυμος στις 19:11 Δεν υπάρχουν σχόλια:

Mireo DON'T PANIC: Some BlackBerry users moving maps to their SD cards might be experiencing problems.

Some BlackBerry users moving maps to their SD cards might be experiencing problems.

The SD card install bug is a BB 10 OS issue that we're going to try to work around.

For now, the solution is to uninstall the app. Erase the dontpanic folder on the SD card and reinstall the app. Ignore the startup messages and go to Settings then to the second page About and press Recover Content. Choose the internal memory as the destination.

We're working on a permanent fix.

Today we announce a collaboration with HERE to release of a new visualization called Living Cities. It analyzes and visualizes transit information, dynamic demographic information such as language usage in neighborhoods, points of interest, and bold facts. The result is a fresh visualization, showcasing a normal day in London, Chicago, Rome, Helsinki and Mumbai. Users can view how a city changes through different times of the day and learn various facts about the city, neighborhoods, places, and people. The visualization allows users control and interact with the map and sharing facts in social networks.
The data behind the visualization is continuously collected by HERE through connected devices. This data is then anonymized and aggregated so that HERE can see how traffic is flowing (or not) in the city. With that data, HERE creates up-to-date maps that are used online and on millions of devices. If a road is closed or if a new road has opened, for example, HERE can quickly make changes so that its maps are fresh and accurate.
The visualization was built by CartoDB using their cloud infrastructure. It makes use of HTML5 technology to animate geospatial data sets over time. Data is aggregated by HERE and hosted on CartoDB to be used in the visualization. It makes use of some of new technologies that will become available in CartoDB 2.1 and is a good example on how big data and visualization can provide insight into our cities.
We hope you enjoy it!

To use the GPS function with your device, you will need to use the HERE Maps application. It provides a rich set of features for navigation, transit options, traffic conditions and views from satellite.
There are 2 ways to open the application:
Tap the rounded square icons on the right side of the screen to view options.
Use the Save a map area option to save a map for offline use while you travel to your destination.